British army personnel has been cut back by more than 20,000 - three years ahead of target, the BBC has learned.

More reservists are being recruited but that process has been slow.

Former commander Richard Kemp said it showed the plan was "incoherent" but the MoD said the Army had the "manpower we need at the moment".

Col Kemp, a commander of British forces in Afghanistan, told the BBC News website: "To have already made the cuts by 2015, it shows confusion and targets that don't match up... it doesn't mean it's a good thing.

"The whole plan was to cover the gaps with reservists, but if you've not achieved that then it must mean that we have got deficiencies.

"Not only does that cause us concern about how we govern our people, but it is also the message we are sending to our enemies. That kind of message always shows aggression towards us."

Former chief of the defence staff General Lord Richards has referred to the plan as "a brave experiment", while John Gearson, professor of national security studies at Kings College, London said: "I think it is accepted that the recruitment programme has underperformed.

"With the absence of a major conflict maybe they will come through... It is a calculated risk." 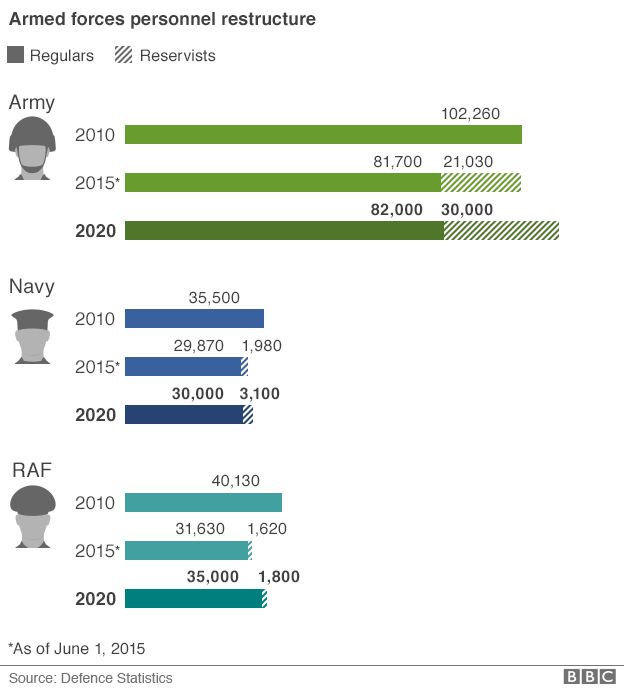 Cuts began after the government's strategic defence and security review called for a restructure - dubbed Army 2020 - to help reduce the UK budget deficit.

The other services have also already exceeded their targets for job cuts, with the RAF losing 8,500 personnel and the Royal Navy cutting more than 5,500 posts since 2010.

An MoD spokesman said: "This government is committed to an army of 82,000 and the funding is in place to deliver it.

"We have the manpower we need at the moment and, working with the army, we are taking clear action to keep driving recruitment upwards."

"The figures need to be looked at again within the context of Strategic Defence and Security review in the autumn. If there is shortage of capability, clearly it needs to be addressed," he said.

Former Defence Secretary Sir Malcolm Rifkind said: "If they have achieved what they set out to do then that must be satisfactory.

"The government had to have a strategy to deal with the economic situation. It was always going to be challenging to increase reserves at the same time.

"Will it be achieved? I think the jury is still out on that."

Prof Keith Hartley, defence economist from the University of York, said he believed the government targets for the Army had been realistic post the conflicts in Iraq and Afghanistan.

"It is perfectly sensible, but we must also realise that we have a lower defence capability," he said.

"We can't fight in as many wars and conflicts. We must look at the alternatives like the use of air power to replace boots on the ground as well as technology like drones." 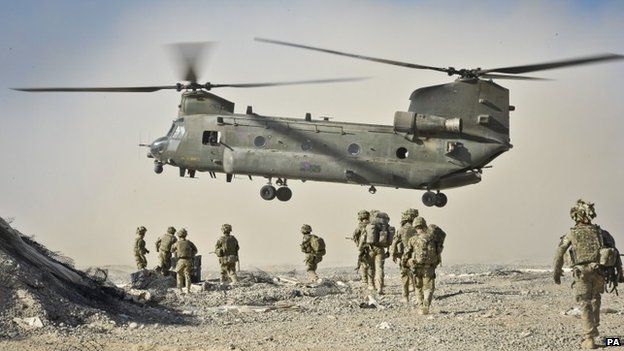 In 2014, MPs on the defence select committee warned there were shortages of specialist personnel i nthe Army and Royal Navy that were leaving the military 'vulnerable'.

A lack of nurses, intelligence operators and qualified engineers were among those highlighted.

In response, ministers said restructuring had led to "temporary shortages" in some areas but frontline operations were being protected.

Earlier this month, Chancellor George Osborne ended months of speculation when he announced the government was committed to spending 2% of national income on defence for the whole of the next decade.

But Prof Malcolm Chalmers, from the defence think tank RUSI, said retaining military personnel would be tougher in the future.

"Historically, military pay has risen in line with trends in the private sector, but that's not been happening since 2010 and the decision to limit pay rises to 1% each year means that this falling behind in pay levels is going to continue," he said.

"The problem of the future will be less that of redundancy as whether the armed forces can recruit and retain the best people."

"David Cameron has said in bold terms the Army would not go below 82,000 during his term... But I do think it will be much harder to recruit in the future. Now the economy is picking up, opportunities may be much better outside the forces.

"The fact the Army may not be doing as many interesting things may also have an impact."